TL;DR: This is an instruction how to emulate the signals produced by an IR receiver with an Arduino.

For the last father's day, my wife got me this Star Wars-themed acrylic LED light. 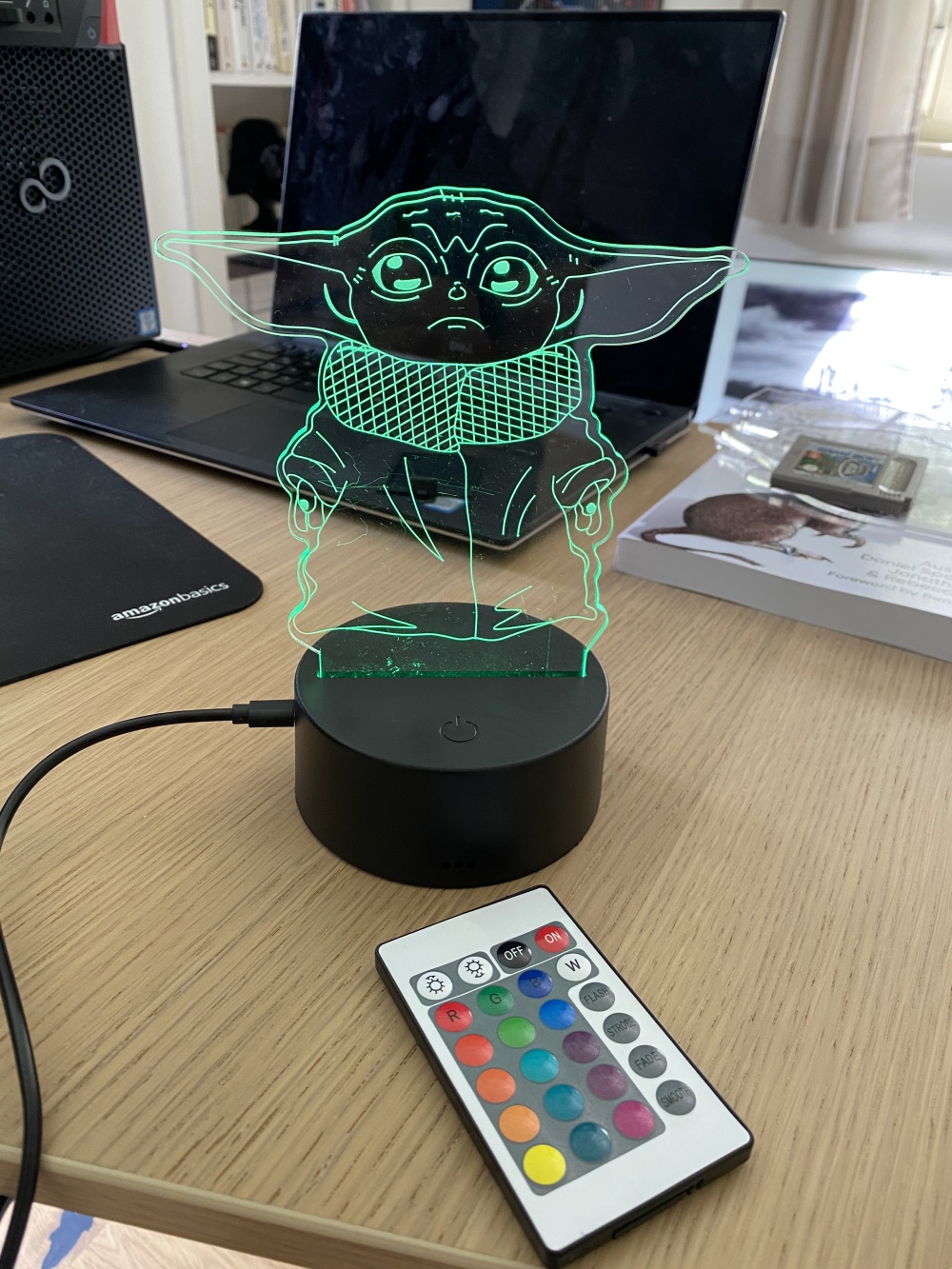 It comes with replaceable acrylic plates (Yoda, the Death Star, the Millenium Falcon, and Boba Fett) and the typical LED IR remote control. 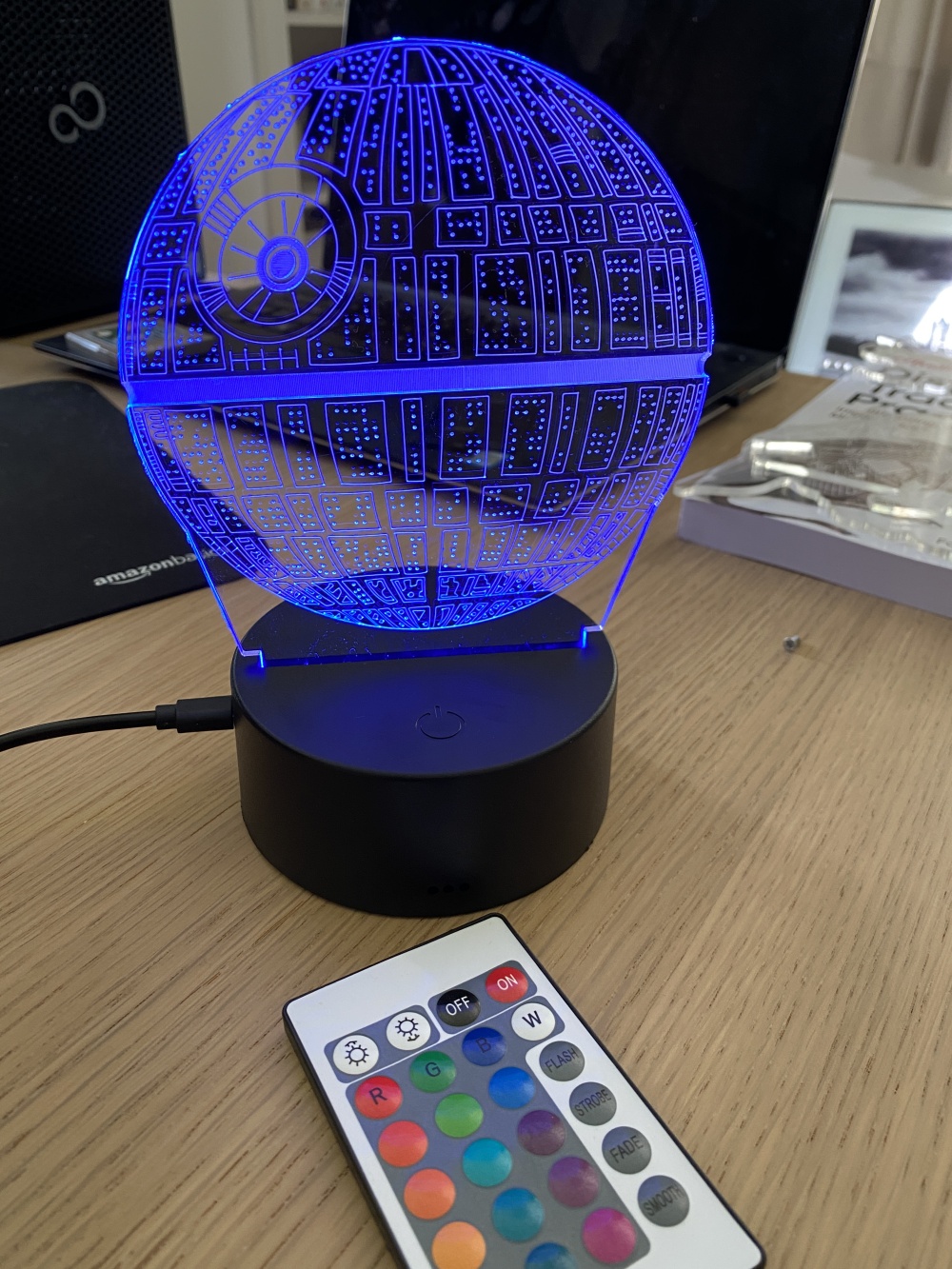 While the interaction with LED remote controls is fun on the first day, I'm generally not a big fan of those.

So I decided to hack the lamp and replace the IR control with something else.

Getting rid of the IR remote

The simplest way would have been adding an IR sender to an Arduino and just sending the remote control codes. There are plenty of projects out there (e.g. this one) doing exactly that.

However, I was interested in going a level deeper and fully replacing the IR receiver.

So I unsoldered the IR receiver component. 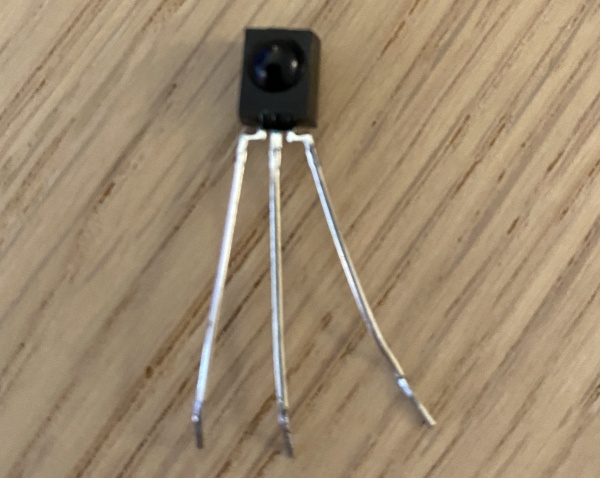 Then connected an Arduino's output pin to where the IR signal line was before.

Now I had to produce the same signal with the Arduino that the IR receiver had generated before. With a bit of Googling, I learned about the NEC IR Protocol is the typical default for such devices. Fortunately, it is relatively simple:

The signal is high by default (when nothing is sent).

If a command is sent, a frame looks like this:

The individual bytes are sent LSB (least significant bit) first and the bits are encoded like this:

The frame ends with another 560 µs low signal.

Here's a visualization of such a frame (found here):

I also found an existing Arduino implementation of this protocol and a list of the alleged (😬!) IR control codes.

It would have been too easy if this had worked immediately - of course, it did not. 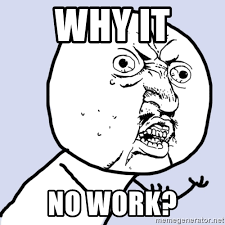 So I spent a couple of hours tracking down the problem.

Finally, using the Arduino IRremote library put me back on the right track. I examined the actual data sent by the IR remote using the MinimalReceiver sample, that decodes the NEC protocol.

It turned out that I had relied too much on the resources that I had found before.

Looking at the output, that this sample produced ...

... I realized that neither the address nor the command were in the format that I had expected all the time.

So, I made these small adaptions to my Arduino sketch and suddenly it was working 🤩!

Below is the full sample code.

And here's the project in action.